“In 2011, I had launched myself into the world of public sculpture having just completed my first commission. It was a life size bronze sculpture of a German shepherd dog for the K9 Memorial at Tahmoor, NSW. I came to realise through that commission that there was a lot that I needed to learn about public commissions. In the following year an opportunity came for a scholarship in the Emerging Sculptors Program with TBSSS and I was successful in getting a place. My aim was to learn more about public sculpture and hopefully get a large scale commission. It must have been my lucky year as I actually managed to get involved in two commissions for large scale works during the programme through TBSSS.

Transition – Green Square School, Waterloo: The first commission was for Green Square School, Waterloo.  Fellow sculptor, Susann Taylor (also a participant of the Emerging Sculptors Programme) and I were both eager to be part of this project jointly collaborated with students of the school to produce a 3.5m tall abstract stainless steel sculpture titled ‘Transition’.

The Story of St Patrick – Holy Cross College, Ryde: The second commission which arose later that year was from the Holy Cross College at Ryde, NSW. The brief was for a large scale relief sculpture of St Patrick which manifests the enormous energy of the man expressed in a contemporary manner. My concept for this commission was a suite of sculptures comprising a single large icon of St Patrick 3m tall supported by 4 small icons telling the life story of a remarkable man taken captive in his youth into slavery in Ireland. He eventually escaped his captors and would later return to Ireland and become St Patrick, the patron saint of Ireland. 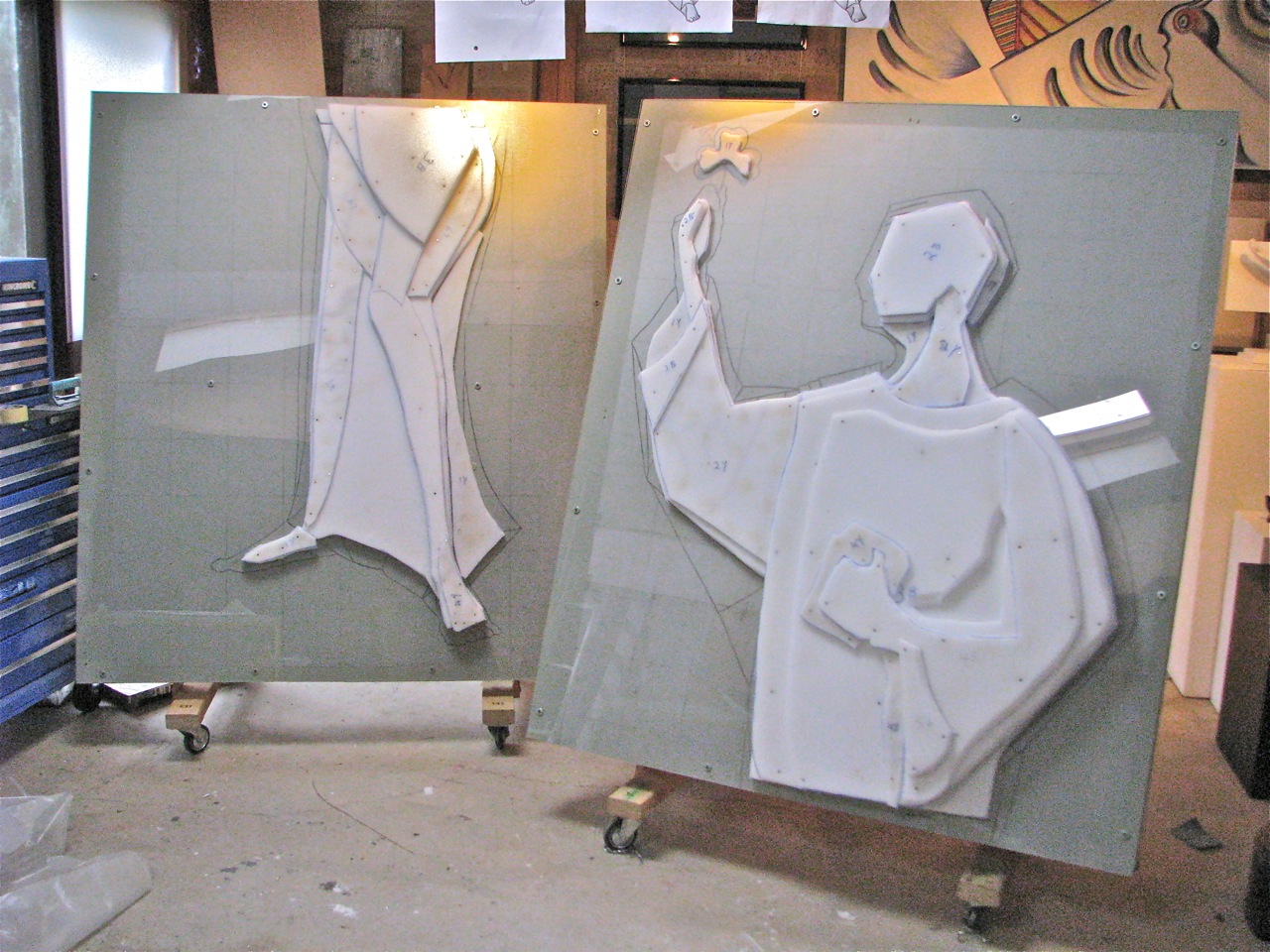 My design proposal was selected for the commission and I began to developing the maquettes into the large scale works. Using the grid system of enlarging, I produced design patterns for the structures of the works.The smaller icons did not present any difficulties.  However, the 3m tall large icon was another matter. As my studio was not tall enough to stand the work vertically it was necessary to think laterally. I constructed two work platforms which could be bolted together into one large platform with the ability to tilt sideways for a horizontal viewing of my work. This allowed me to model the relief work in two halves in a vertical position on each of work platforms. I could then join and tilt the platform side ways to view the sculpture as one complete work. At regular intervals I would photographed my progress of the complete sculpture and vertically rotated the image on my computer for critical viewing and analysis.This process worked well for me and all works were successfully completed in time for bronze casting.

I am most grateful to Chair Margo Hoekstra and TBSSS for giving me the opportunity to participate in both commissions and for all her help throughout the projects. I am also grateful to Adam Taylor, Principal of the Holy Cross College for awarding me the St Patrick commission and to Br Mark Ryan  for his invaluable input into the religious aspects of the works.

The suite of sculptures were officially unveiled on St Patrick’s Day 2016 and stand at the gates as a visual relating the Story of St Patrick to students and passers by.”

This entry was posted in Uncategorized. Bookmark the permalink.